Whoa! That was outside of my comfort zone! Last week I began work on one of my 2016 goals for Aspire Images – blogging. Which is tied closely to connecting and being present. I’ve only recently begun to learn the value of blogging when it comes to reaching people. And since I my intention for this year is to build and strengthen relationships, I figured blogging was a natural step in that process. But what I didn’t figure was that it would be something that would push me out of my comfort zone. No joke!

I suppose it’s a bit like photography – it’s a learned skill that incorporates a lot of different elements. I had to determine who I wanted to reach and what message did I want to send. Make it engaging and interesting, informative and light. Ever mindful of tone and always being real so my audience would get to know me. After all, my goal is to build relationships. It all seems easy enough, but bringing all the pieces together into one coherent piece is a little more tricky. One of those instances where the whole is greater than the sum of the parts.

It reminded me of when I began my career as a wedding and portrait photographer. I was SCARED.TO.DEATH. of my first camera. Terrified of it actually! It took me nearly two hours of looking at in the box, reaching in and then pulling back before I had the courage to pull it out and attach the lens. I had no idea at that time how much I didn’t know about the career I had just chosen. And when I look back now at how much I’ve learned and how much I didn’t know that I didn’t know, I’m thankful for that naïveté. I’m thankful because had I known how long, how challenging and how frustrating the journey would be at times; if I had known how much I had to learn and all of the mistakes I would make along the way before I began to feel comfortable in my skill set, I may well have never started.

I didn’t know anything about f-stops or shutter speed, lighting or depth of field, light modifiers or Photoshop. I shot in auto mode because that was the only thing I could figure out at the time. And then I met my mentor and business partner, Noah Bryant of Noah Bryant Photography – someone whom I admire a great deal and without whom I would be nowhere near the photographer I am today. And step by he began to teach me the ins and outs of my equipment. He taught me to understand light, how to “see” it and then to manipulate it. He was patient with me and never belittled me or criticized my errors. He just showed me a better way, asked me what I learned and pushed me to be better. I began to learn post-processing skills, aka Photoshop. WOW was that overwhelming! You want to talk about an entire subject in and of itself. That pushed me in a whole new way. (The image to the right is from my very first paid session. Thanks Mom and Dad for helping a girl out! All I can say is, we all start somewhere.)

In the beginning I fumbled my way along, faking it until I could make it. I got frustrated, discouraged, down on myself. I would cry at times because I had a vision in my head but just could not, no matter what I tried, bring that vision to life in my photographs. Wedding photography and newborn photography were two of the hardest subjects for me – no do-overs, no second chances. It was a lot of pressure and I wanted to be the best, but I just wasn’t there and couldn’t bring the images to life. The below image is from one of my first ever newborn sessions (yikes, did I have a long way to go!). 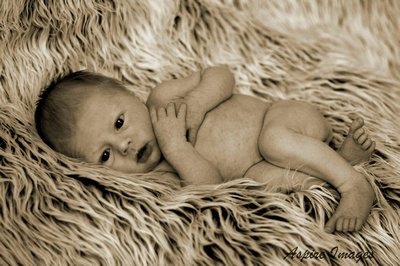 But then somewhere along the way something else started to happen. Slowly, almost imperceptibly at first, I began to struggle less. I began to realize my vision more often than I didn’t. As my skills began to grow and I began to build on things I had learned, I began to find my way and my style. Eventually I reached a point where I was comfortable with my equipment (now shooting in full manual mode 100% of the time) and I had to think about the technical components less. Once that happened it opened me up to be able to focus on being creative, on really developing my own look and style.

Some gave all so that we may sleep in peace.I was asked to hang a large canvas of this image at Skyridge Medical Center last spring.

And then people started to love that style. Last spring I was asked to hang a large canvas of the above image in the Skyridge Medical Center's Mom & Baby wing. What an honor that was! This is a process and a journey that I began over five and a half years ago. I cannot say that I have “arrived” at a specific point because I am always learning, always growing. But I can say that every step of the journey has taught me something. And if I hadn’t struggled in those early days, if I hadn’t cried with frustration and forced myself to learn new things and better ways so I could produce what I saw in my mind’s eye, if I hadn’t faced each of those challenges then I wouldn’t be where I am today. I’m sure I will continue to have those challenges in different ways as I continue, but the point is this:

In order to enjoy the benefits, you have to embrace the journey!

You don’t just arrive one day at being a pro-athlete. It takes years of commitment and hard work. You don’t just suddenly become fluent in multiple languages, you have to stumble through the mispronounced words and lack of understanding. Its through the journey that you find the skills needed.

We are quickly coming up on the single biggest day for marriage proposals in the United States – Valentine’s Day. We work with a lot of newly engaged couples and love being able to share this special time with them. I will listen to the preacher during ceremonies and hear the advice he gives them for their marriage. Try to out-give and out-serve the other, always put the other’s needs first, and any other number of wise words. And then I hear the couple promise to never let the other down, to always support them and vow to be there through thick and thin. And I think about my early photography career – when I didn’t know how much I didn’t know and I was clueless about how it all worked, I just knew I loved it. When I began my marriage, and when I became a mother, I had no idea how hard it would be – just that I loved them. And the couples we work with are the same way – they don’t know yet how hard (or how rewarding) marriage can be, just that they love each other.

I don’t say that to be negative. Being a wife and a mother are without question the most rewarding relationships in my life. But they bring their challenges. And it is through them that I grow, that we grow together. And so I think about my couples exchanging their vows and a part of me wants to tell them that they will let each other down, hurt each other and have difficult times. But then I remember my own path and struggles and I love that they don’t know those things yet, just that they love each other. And so then I just want to tell them to embrace the journey, and each step of the way to love where they are, to learn from all of the experiences. And to embrace the negative, frustrating, and challenging ones. For it is out of those struggles that we grow. It is through adversity that we learn to persevere. And it is through commitment by choice that we will face the struggles and by not giving up, will make it through to other side to enjoy the benefits.